There have been quite a few reports released over the years exploring ways forward for the Mitchell Park Domes. This page collects many of them and makes them available as a community resource. The collective message of these reports is that there are creative, sustainable, equitable ways forward toward a long-term preservation solution that ensures this treasure is around for many decades to come!

Domes Business Plan Analysis, 2022  - This analysis, completed by Baker Tilly and Husch Blackwell, analyzed the financial and legal aspects of the Domes Task Force's proposed funding possibilities. While finding flaws in some of the financing mechanisms, it also contains information on how an updated plan can be devised and concludes that the Domes can have a successful future. While the new report does not believe the entire funding stack is feasible as written, it notes that many of the funding mechanisms, including Historic Tax Credits, are viable and encourages further study toward a solution.
Domes Business Plan Analysis
Final Domes Task Force Plan, 2019  - The final plan put forth by the Domes Task Force, a County-commissioned group of County Supervisors and residents that explored all possibilities for the Domes, included public engagement, and suggested a preservation solution based on a vision that would redevelop the entire park for financial sustainability through public/private partnerships while preserving the Domes using Historic Tax Credits. Could create 300 jobs and $16 million/yr in economic impact.
Glazing System Investigation, 2019  - This County-commissioned report completed by ZS Engineering presents 3 options for glazing repair for all 3 domes ranging from $18,845,000-$19,500,000 total. All options would provide a life span far in excess of the 20-year system warranty.
Concrete Report, 2019  - This County-commissioned report completed by Pierce Engineering found that the concrete at the Domes is in reasonably good condition, wall delaminations are minor, and that the concrete frame can last several more decades if a few maintenance interventions are included in future glazing replacement. This combined with the Glazing Report demonstrate that the the major elements of the Domes in need of work could be preserved for decades of future use for roughly $20 million.
Concrete Report
Peer Review, 2017  - This report was commissioned by the National Trust for Historic Preservation and was completed by internationally-recognized experts in historic preservation and mid-century architecture Wiss, Janney, Elstner Associates as a peer review of the existing Graef report. The report demonstrates that the Domes' glazing is repairable and replacement is not necessary or recommended. It further explains that the energy savings stated in the Graef report replacement solution would take 200 years to recover.
Peer Review
GREAF Report, 2016  - This County-commissioned report suggests a high $64 million price tag for replacing rather than repairing the Domes' glazing. Its recommendations have been superseded by more recent reports (above) and are inconsistent with Resolution 16-200 (below).
GRAEF Report
Resolution 16-200, 2016  - This resolution approved by the Milwaukee County Board of Supervisors set official County policy to “pursue the repair and preservation of the existing Mitchell Park Conservatory Domes."
Resolution 16-200 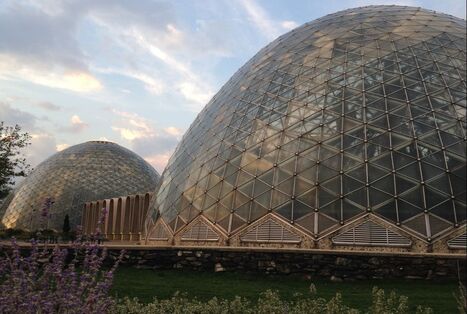