​Save the Soldiers Home 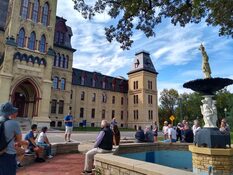 We’re thrilled to be able to offer FREE walking tours of the Soldiers Home grounds, including a stop in the newly restored Old Main to see the incredible preservation work and take in the building’s history exhibit.
​
We will resume tours in summer 2023!

Each tour is 90 minutes long, approximately 1 mile, and will cover a variety of fascinating information including the history, architecture, and preservation stories of these historic buildings. Tours run rain or shine. We are pleased to offer these tours for FREE, but you are welcome leave a donation during the registration process to ensure these tours remain accessible to all.

Can't make it to a scheduled tour? We even have Soldiers Home Walking Tour app!

Group Tours and Presentations
Does your group want to learn more about the history and architecture of the beautiful Milwaukee Soldiers Home? MPA staff are available for hour-long presentations for a small donation. Contact mpa@milwaukeepreservation.org.
The Save the Soldiers Home Project is a local initiative and partnership between the Milwaukee Preservation Alliance, Inc. (MPA) and the National Trust for Historic Preservation (NTHP) to create awareness, rouse interest and build public support at the local level for the restoration and reuse of the Milwaukee Soldiers Home Historic District. The two organizations have been working closely for several years, but the momentum for the project was bolstered following the roof collapse at the rear wing of Old Main in February of 2010.

The effort leveraged grassroots advocacy and engagement and key preservation tools such as Section 106 of the National Historic Preservation Act of 1966 to bring together local, state, and national preservation groups, veterans and related organizations to encourage action to return some of the District’s most threatened historic buildings to the service of veterans.
​
Thanks to this effort, in 2016, a team led by The Alexander Company and the Housing Authority of the City of Milwaukee was chosen by the Department of Veterans Affairs to rehabilitate a number of the Milwaukee Soldiers Home District’s historic buildings, including the iconic Old Main, Administration Building, Catholic Chaplain's Quarters, and three duplexes. As of March 2021, these historic buildings now serve as permanent supportive housing for veterans and their families at risk of homelessness, serving as proof positive that strategic partnerships, visionary leadership, and creative funding cannot just save buildings, but tackle homelessness, ignite a community, and serve as a national model as well.

Building on the success of this award-winning effort, MPA continues to advocate for the continued revitalization of other key parts of the Soldiers Home campus. Several key buildings, including Ward Memorial Theater, Governor’s Mansion, and Chapel remain unused and deteriorating. MPA is currently encouraging the VA to pursue a request for proposals seeking a developer to rehabilitate these three notable, vacant historic buildings, as it did with Old Main.

Since the roof collapse in the rear wing of Old Main, a collaboration of local, regional and national stakeholders were galvanized to work with the VA to find a solution for the stabilization, maintenance, restoration and reuse of the historic buildings in the Milwaukee Soldiers Home Historic District. These organizations and agencies worked behind the scenes for several years to effect change in the VA’s treatment and perception of the value of these historic and cultural assets. Amongst these preservation partners are the Wisconsin State Historic Preservation Office, National Park Service, Advisory Council for Historic Preservation, Milwaukee Historic Preservation Commission and Milwaukee Preservation Alliance.

As the local partner in this collaborative, Milwaukee Preservation Alliance understands the significance of the Milwaukee Soldiers Home to veterans as well as the Milwaukee community. Accordingly, MPA and the National Trust for Historic Preservation organized the Community Advisory Council to communicate the work that is going on behind the scenes and solicit feedback from community members and stakeholders and accurately represent the Milwaukee community. The CAC includes members from veteran groups, preservation organizations, representatives of neighborhood associations and civic and government leaders.